The History of Brazilian Jiu Jitsu

At Fenix Highlanders Club, nothing makes us prouder than knowing that we are one of the countless different groups continuing the extensive and elegant history of Jiu-Jitsu. Having spent centuries becoming what it is today, we understand that we are merely custodians of the knowledge, which we seek only to pass on to our students. The full history is rich and diverse, and something that you should have in mind when delving deeper into the art.

The Origins and Early History of Jiu-Jitsu

According to written histories and accounts coming from Japan during the Nara period (roughly the eighth century), jujitsu began to take shape as a result of the combination of early forms of martial arts. Initially trained as a close combat alternative to be used on the battlefield, it was intended to play a frontal role in many military practices. Most people agree that the earliest known forms of jujitsu are Shinden Fudo-ryū, Tenshin Shōden Katori Shintō-ryū, and Takenouchi-ryū. These find similarities with many modern aspects of Jiu-Jitsu, as well as incorporating tactics that were historically used against long and short weapons.

With swords, spears, and longer weapons very common in traditional Japanese combat, as well as daggers and smaller arms, it was important to find ways to parry and counter. This was in stark contrast to other nations, such as Okinawa and China, both of which had a more precise focus on striking technique. Japanese cultures conversely aimed to achieve an exceptional level of hand-to-hand ability, including such formats as throwing, immobilizing, strangling, and choking, joint-lock throwing, and ground fighting in certain capacities.

During the next one thousand years, the varying martial arts practiced across Japan began to take shape and form sets of rules. These rules gradually became laws as the practice began to be more of a lifestyle commitment. By the time the 17th century came around and the country entered into its Edo period, jujitsu had seen notable change and concrete definition.

The Tokugawa shogunate began imposing strict laws on many aspects of Japanese life, to emulate the influence of Neo-Confucian Chinese philosophy. As the beliefs permeated the social structure of the country, war became a much less necessary part of day-to-day life, which saw changes in the way combat was perceived. During the invasions of Korea, various scholars picked up innovative ideas and allowed them to spread through the country. Weapons and armor were subsequently much less important and were even relegated to decorative and ornamental levels. This paved the way for unarmed combat to become the new normal, with many new formats flourishing.

Jujitsu in particular was the driving force behind new thoughts concerning striking techniques. To deal with unarmored opponents, a plethora of moves and disciplines were born. These specifically focused on the vital areas above the shoulders, including specific striking tactics that targeted the eyes, throat, and neck. But by the time to following century came around, these techniques began to change once again, as many were considered to be ineffective and an unnecessary exertion of energy. Instead, these became a tactic used to throw off the focus or the balance of the enemy, or a way to lead into a strangle or throw – finally integrating into a more whole and well-rounded battle style.

During this very same period in Japanese history, the quickly growing jujitsu schools began to invite and challenge one another to fight in duels. The political structure in Japan was perhaps the most stable that it had ever been, up until this point, with times of war significantly diminished. This meant that schools could flourish, with healthy competition, which became a welcome pastime for many warriors away from the battlefield. And, as a result, randori first came into existence, as a way for each to practice against other institutions with a common set of laws and expectations without any lethal implications. 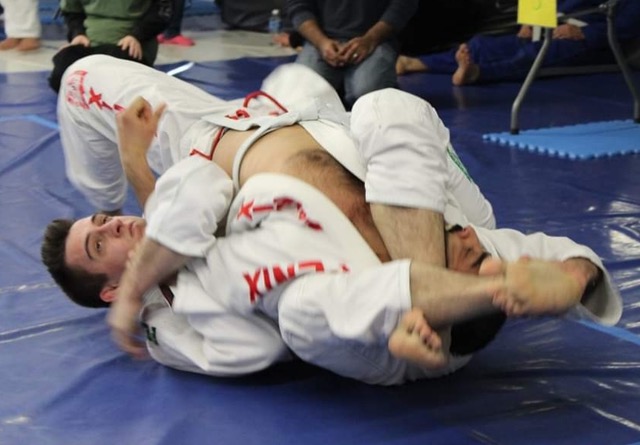 Following the evidence that we have available to us today, the first time that the word jujitsu was used was during the 17th century. It quickly became an umbrella term, used to describe a broad range of distinct types of grappling-based martial art techniques and disciplines. Prior to this, there were different names used to describe each, unique area. Things like “short sword grappling” (小具足腰之廻, kogusoku koshi no mawari), “art of harmony” (和術, wajutsu, yawarajutsu), and the “way of softness” (柔道, jūdō) were all commonly used terms, with countless others having been discovered, too. However, it was jujitsu that would go on to stand the test of time.

In the modern-day, the assorted practices of unarmed fighting have been grouped together to be referred to as old-style jujitsu. These typically include the ones that were invented during the Muromachi period (1333–1573). By this time, these martial arts were not specifically unarmed combat but were instead an integral part of general wartime combat. Used as a solution for an unarmed or lightly armored warrior to counter the movements and attacks of a more heavily outfitted individual. Many passed down stories tell of how it became nearly impossible for many samurai to make use of his longer and heavier weaponry, being forced into close-quarters combat. Quickly, much of the fighting taking place was limited to the skills of two fighters with little more than daggers, short shorts, grapples, and other forms of hand-to-hand combat.

The Arrival of Jiujitsu in Brazil

Jiujitsu first arrived in Brazil via a Japanese diplomat, known as Mitsuyo Maeda, during the early 19 hundreds. Initially, he was trained in the art of Judo, otherwise known as Kano Jiujitsu, which became the foundation of the movement, before it eventually became the Brazilian Jiujitsu that we are more familiar with today.

According to different sources from the time, Maeda first began demonstrating Jiujitsu in the Teatro Variedades in Santos City, on the 24th of September 1914. He then toured through the country, spreading across different cities where he would hold demonstrations and events. This went on for many years and lead to the appeal of the sport growing across the country before he finally came to opening up his own academy. He demonstrated a variety of different moves and techniques, allowing the interest to augment greatly.

At the same time, he made a lot of improvisations and adaptations to the sport, eventually deviating from the original Judo. These took influence from his experience and understanding of other fighting sports, with which he had much professional success over the span of his career. This further paved the way for adaptations to grow into children’s and women’s disciplines of the sport, which have no doubt grown in popularity today.

The Birth of Brazilian Jiujitsu

The Gracie family is a prominent name in the history of Jiujitsu. With many of the members of the family being famously taught by Maeda himself, they were influenced by the core ideas of the sport from an early age. Carlos, was the first one to be taught the ways of Judo by the master, learning with him for around five years. This quickly turned into him passing this on to the rest of the family, with family members Oswaldo, Gastao Jr, George, and Hélio all studying the art. But it would go on to be Hélio Gracie that would achieve the most success, translating the learned knowledge into being one of the most outstanding martial artists in Brazilian history.

Known to many as the Godfather of Brazilian Jiujitsu, he has a reputation for being one of the most exceptional sportsmen of his era. As he grew up, he placed a focus on a more leverage and ground-based discipline, in the place of throws. This has been attributed to his inability to match all of the Judo throws, on account of his smaller and more diminutive build.

However, even though the vast majority of people associate the founding of the sport with the Gracie family, there was another lineage that has been associated with another famous Brazilian. Another national hero, a man named Luiz Franca was tasked with teaching his skills to the famous Italian Jiujitsu professional, Marco Donello, and indirectly his Australian nephew, Mark McDonnell. This saw two distinct styles being developed, however, both now have a credible and vital place in the history of the development of modern BJJ.

Arrival in The United States

Finally, in the year 1972, the first credible Brazilian Jiujitsu teachers started to arrive at the states and found their own schools, gyms, and academies. Carley Gracie moved to the US this same year, followed by another member of the family, Rorion Gracie, in 1978. Rorion is credited as one of the co-founders of the UFC, also known as the Ultimate Fighting Championship, which has now gone on to be one of the most successful sporting franchises of all time. The sport came to real, international level prominence after Royce Gracie won three out of four consecutive Ultimate Fighting Championships, in the single-elimination format.